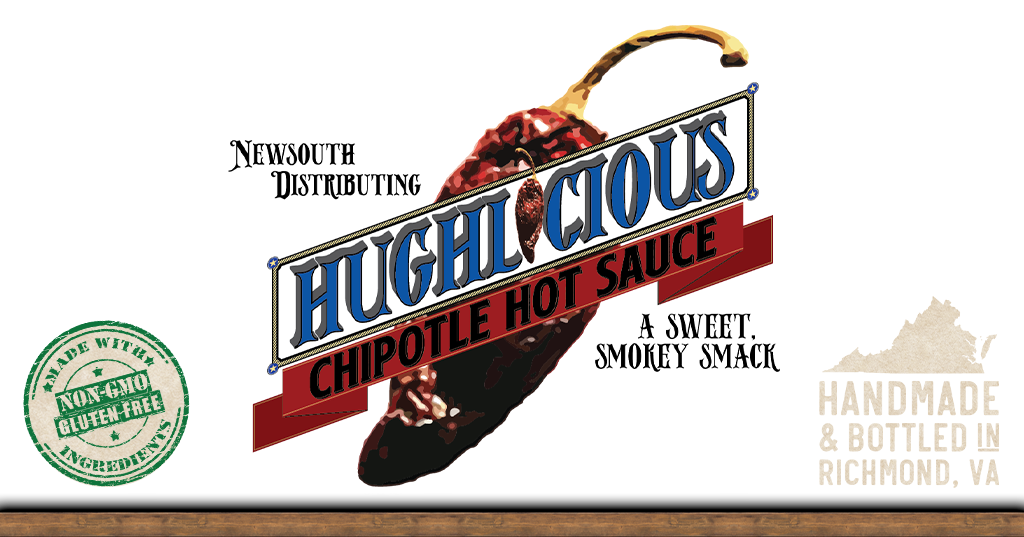 Hughlicious Chipotle Hot Sauce is your go-to sauce for chicken, beef, vegetables, cream cheese, sour cream and just about anything you want to add a sweet, smokey smack. Get yourself a bottle or two and let your taste buds lead the way. 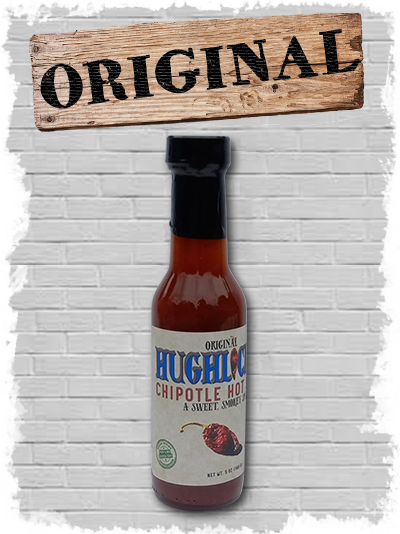 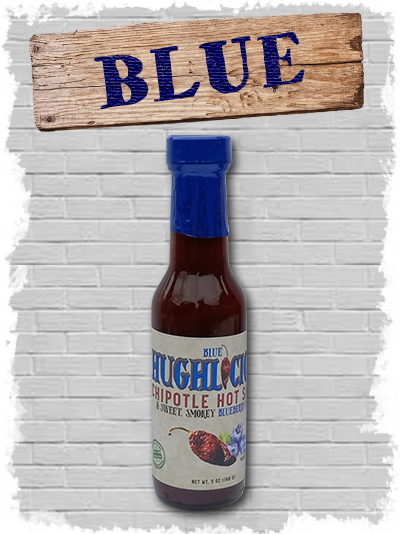 Our Original Hughlicious sauce infused with the succulent
taste of blueberries.
Add a new dimension to your recipes. 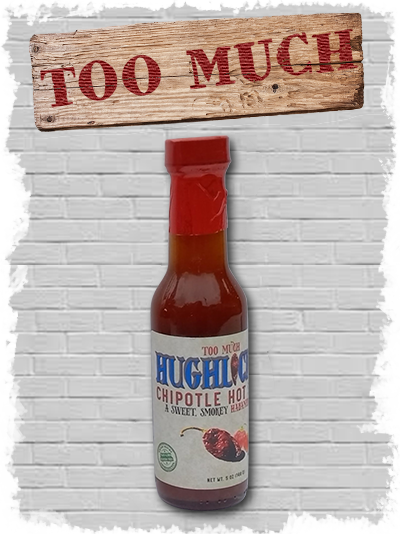 Need a ‘lil more kick?
This version of Hughlicious throws some habanero in the mix to kick it up a whole bunch of notches.

Hugh Mosher, the founder of Hughlicious Hot Sauce (formerly “Damn Yankee Hot Sauce”) grew up in Englewood, New Jersey. In the late 1990s he moved south to Richmond, Virginia where he put down roots working for a plumbing and heating contractor. Eventually, he opened his own repair business which he aptly named New South Construction. Even after living in Richmond for years, Hugh’s friends always jokingly called him a “damn Yankee.” It became his good-natured badge of honor.

After tasting and testing of different recipes, and there were many, he found just the right combination of ingredients and Hughlicious Chipotle Hot Sauce was born. “Everyone who tasted it, loved its sweet and smoky smack!” he says.

In 2015 Hugh invested his money from a busy winter’s contracting work and launched production of Hughlicious Chipotle Hot Sauce. His first run produced a respectable 12 cases of 5-ounce bottles, and four one-gallon jugs — for his “Core-4” restaurants. A special “thanks” goes out to them from Hugh just for believing in him. They are: Pig & Pearl, O’Toole’s, Poe’s Pub and River City Diner (downtown).

The rest is history, and the popularity of Hughlicious sauces has grown rapidly. Hughlicious Hot Sauces are now available in 140+ retail locations and served in a number of restaurants throughout Richmond and beyond.

Created for the first time in 2013, and given away free for two years, formerly called Damn Yankee, and now called Hughlicious Chipotle Hot Sauce, has become a sought-after condiment. The successful launch of ORIGINAL in 2015 was followed by the introduction of BLUE and TOO MUCH in 2017. BLUE is one of the few blueberry hot sauces on the market, and TOO MUCH is a hotter version of the original.

The basis for Hughlicious Hot Sauce is chipotle peppers (smoked jalapenos) packed in adobo sauce. These Mexican-style peppers give Hughlicious a unique south-of-the-border flavor. All ingredients are locally sourced from restaurant suppliers with the exception of the honey, which is harvested in Pennsylvania. Keeping the ingredients simple and local, ensure that these sauces are of the highest quality as well as non-GMO and Gluten-free.

Today’s customers want a quality product that they can buy with the confidence of knowing that the ingredients are of the highest quality and the supplier is trustworthy and honest about his sauce. Having the owner of Hughlicious Hot Sauce accessible to provide tastings for sampling the sauce and present recipe ideas is a bonus of the brand. 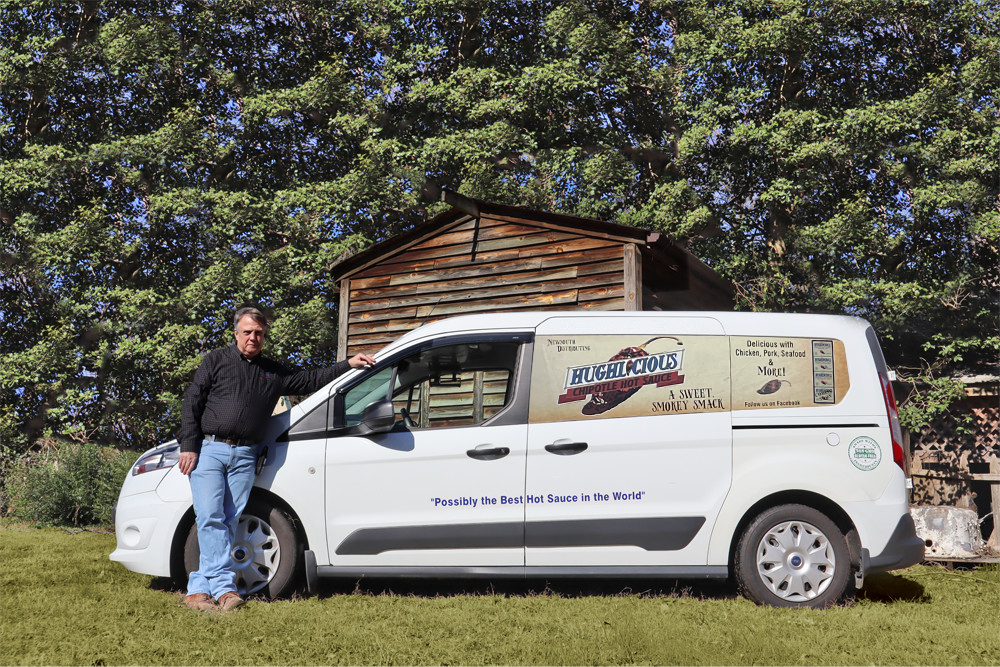 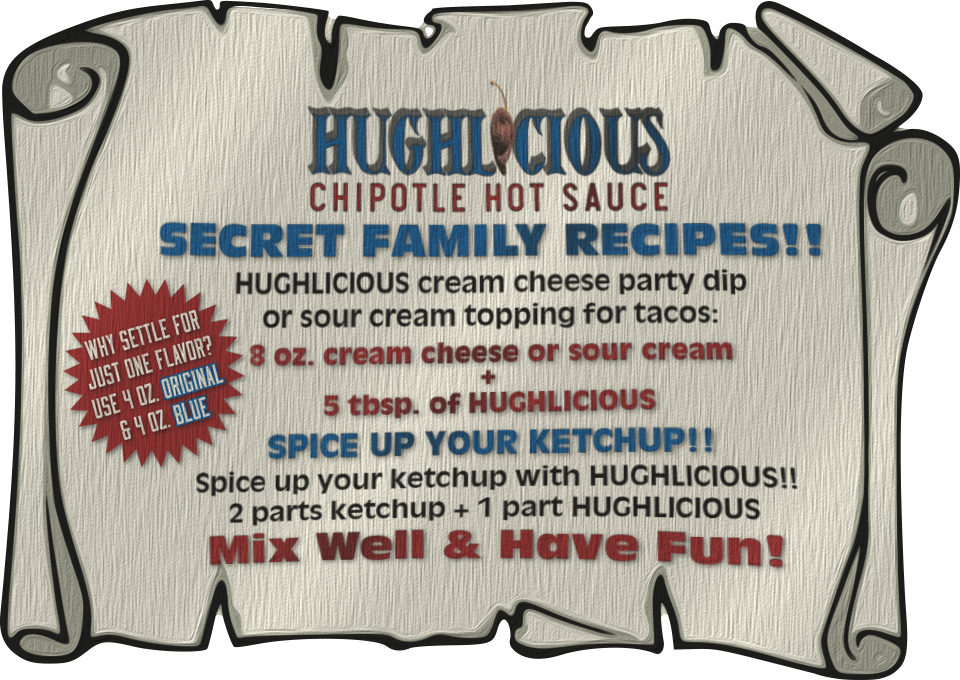 I’d like to give a big thanks to the Damn Yankee himself from all of us at Engine 20. We really enjoyed your visit, the sauces are excellent, and the chili was awesome!

I got the opportunity to try all 3 flavors at Hogtober Festival, and I enjoyed them all! The blueberry is different, but delicious. I would say that my favorite was the one with habanero, it had a good amount of kick with an amazing flavor to go along with it. I plan on providing this at my wedding and then handing them out as party favors.

This chipotle hot sauce tastes fantastic. I think it’s the brown sugar and honey that make it so tasty. I use an adobo based hot sauce on my candied bacon recipe and the taste of this is so close and similar… obviously without the bacon. If you like a full-flavored hot sauce then this is the one for you. I believe the vinegar and tomato sauce thats in this is very little because it is a bit runny, similar consistency to texas peet. Nothing wrong with the consistency or thickness of product but the mouth of the bottle is a little big and can easily pour out too much. I also do prefer a thicker sauce. I heated this sauce up to a little simmer, added in a basic roux and the thicker sauce is just as good. I think this sauce would be good for a fried chicken recipe as well.

We discovered Damn Yankee on the tables at Kahlos’ Mexican restaurant in Goochland. We make it a point to eat there because we love the place and because it is the only place we have found to get Damn Yankee!

This is a really tasty sauce to put on chicken to grill. Love it!!

We purchased a bottle of the Blueberry! I savor this sauce. Absolutely love it! I especially like to do a sweet savory, spicy sauce for grilled cheese! This fits the bill perfectly! We got ours in Scottsville Virginia! Next time I will buy several!

I got the Blueberry and the Original flavors. I enjoyed the hot sauces when I tasted them at the store but when I got home and actually served them I was blown away by how good they are! My husband loves hot sauce but doesn’t typically like fruit flavors. He tried the blueberry anyway and raved about it! Anyway, just wanted to let you know how glad I was to have purchased your hot sauce and I hope it continues to be available at Great Valu.